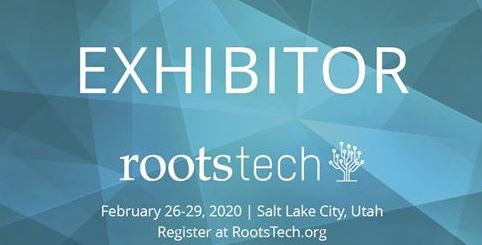 Mags will be at Roots Tech this year. Mainly hanging out at the WikiTree booth – #1311.  Mags will also be helping with the mitYDNA.org booth – #1842.

At the start of my adventure I was amped-up for an incredibly busy long weekend in Salt Lake City. The Expo Hall was open on Wednesday night from 6-8 and I flew in at 5. to the hotel to change into some WikiTree Orange and off to endure the carpet covered concrete floors of the Salt Palace – wait, I just complained. Apologies to Roots Tech because there is absolutely nothing they can do about the floors in the Salt Palace. Of course we could have purchased an upgrade in the floor covering of our booth (this is a discussion between we WikiTree Volunteers EVERY year at Roots Tech).

The Booth was really an intensive “how to connect” to our great big ole shared tree with people this year. We had life-sized cardboard cut-outs of King Henry VIII and Elvis pelvis . People were all GaGa over both

of them! I got to do a demo-stage presentation on WikiTree and connections. W the cut-outs over for the stage but kept Elvis turned so he couldn’t be seen until a big reveal. We had connection issues – note to self, order a macro HDMI connector – The Big Reveal of Elvis caused a few screams from the crowd. Of course, the MC for the Demo Stage had to say, “Elvis has left the building”.Love doing the Demo Stage presentations for WikiTree at Roots Tech.

WikiTree’s total membership grew by 343 since Wednesday. WikiTree Volunteers who never see each other or have never met got a chance to collaborate at the WikiTree booth. It was great fun AND exhausting. I heard that some of our Volunteers stayed up chatting to the wee hours of the morning. Me? My roommate and I were both east coasters and were asleep by the wee hours of the evening – every evening!

I spent a lot of time not promoting Grandma’s Genes, but just being Grandma’s Genes because that is who I am. Many of you came by the booth or stopped me in my wanderings to get selfie’s or a quick question or a wee chat or a hug. I also got some inspiration for a couple of future Grandma’s Genes Blogs. Thanks very much to everyone who suggested blogs or reminded me that I wanted to write about something. Loved seeing you!

I spent a lot of time not promoting mitoYDNA. But we did have a presence at Roots Tech. DNAGedcom and Genetic Family graciously let us have cards and information at their booth. Rob, Gale, Peter, Jamie and I suggested mitoYDNA to people who had questions about our work to provide a crowdsourced, free and accessible mitochondrial and YDNA database. Gale was a great promoter all weekend and had an opportunity to mentioned mitoYDNA in his lectures. Gale created a bit of a buzz as well as being a walking billboard.

If you missed the announcement, we have added two superstars to our team: Jonny Perl (DNA Painter) and Kevin Borland (Borland Genetics).

It’s exciting to see interest in mitoYDNA increase. We are just as excited as you are to move on to matching and beta testing. If you are interested in keeping up with mitoYDNA check out our mitoYDNA Facebook Users Group.

Flying with a Cello

On one of the flights home we had a delay in our flight by 30 minutes because of weather and another delay in forty minutes for a Cello. Yes a Cello. What?! You’ve never flown with your Cello?

Well, you can’t put your Cello into the baggage hold of an aircraft. You must purchase a seat for your Cello. You can’t just buckle your cello to the seat, the airline must cargo net your cello to your seat. The cargo netting is installed by removing all surrounding passengers, then an airline baggage specialist crawls all over all the area seats to get the cargo net applied correctly. Fascinating.

I would have taken a picture, but I didn’t want to get mobbed for being insensitive. Not sure I would have gotten away with , “but I need this for my blog” excuse.

Apparently, I will be hoping the pond again in October of this year to be at Roots Tech London! How about that! Can’t wait.