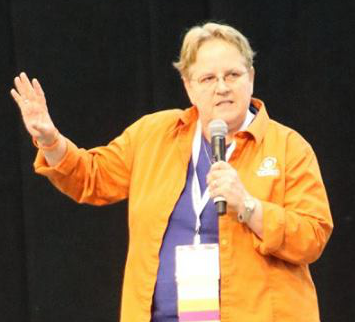 Orange Alert! If you have an aversion to Orange, navigate away from this page now.

Traveling to and From Salt Lake City

Oh the trials and tribulations of flying across the northern hemisphere in winter. The first plane had engine trouble, so the flight to SLC was missed (thank goodness as they eventually arrived in SLC at 3:30 AM after sitting on the plane for 6 hours prior to take off). Air Canada put me and fellow castaways up at the Westin in Chicago for the night then flew us on to SLC the next day. No harm no foul except I missed a planed sleep-over with Eowyn and Julie, and lunch with Darlene Athey Hill.

The flight home was almost as much fun whit the connecting flight from Toronto canceled and foul weather once again at play. I started my travel day before sunrise in SLC and ended it, landing in a snowstorm at 9:00PM.

All the travel woes were worth it.

Dick Eastman, and all of our very orange clad WikiTree RootsTech2017 Team, had breakfast together on the first morning. So Dick was one of the first to amble my way for a five minute chat about DNA. I also wandered the Expo Hall grabbing people as I went to talk about DNA. I tried a bit of stalking…hanging out around session doors to grab speakers after the fact. This approach doesn’t work as the speakers are usually swarmed by adoring fans.

David Allen Lambert, with NEGHS and I had a chance to talk about his DNA Story. WikiTreers Kim Jordan, Randy Whited and Kirsty Gray also carried on a bit about DNA and WikiTree and how it’s important in Genealogy. Peter roberts steered me towards the Innovators tunnel to talk with David Nicholson and Hannah Morden-Nicholson with Living DNA. Interesting how specific their DNA testing can be.

Did some not so subtle eavesdropping on WikiTreer-in-Chief, Chris Whitten, chatting with Luther Tychonievich and Tim Jansen (in front of the only support column in the Salt Palace which was actually a part of our booth).

What to do with the Interview Footage?

All the footage, and then some, of the interviews from RootsTech2017 will be put together in some kind of spiffy Video.

Shenanigans at the WikiTree Booth

Oh, there were shenanigans alright. One of the great things about being able to represent WikiTree at RootsTech is the ability to meet and interact with people, colleagues, genealogists, that you work with on a daily basis. You also get to have fun with your volunteermates (<— this is not a word). From goofing off and being serious about DNA with Peter Roberts to watching Julie and Kitty Dancing to talking to ALL the WikiTree’s who stopped by the booth to Steve the Tree (a guy dressed in a Tree costume…this prompted Chris to ask me if I would dress as an elf for next year…or maybe walk around with a sandwich board, he he) – it was all fun.

What a great, wonderfully exhausting time we all had at RootsTech2017. Thanks to Chris Whitten, Eowyn Langholf, Abby Glann and Julie Ricketts (WikiTree Team) and Fellow WikiTree Leaders, Michael Stills, Karen Tobo, Kitty Cooper Smith and Peter Roberts for making this years WikiTree Booth the brightest Booth (both visually and intellectually) in the Hall.