The pattern of Immigration to the North American Continent in the early days of colonization was to the absolute East Coast. From Nova Scotia to Saint Augustine to New Orleans. When our ancestors arrived they settled pretty close to the coast. It was the safest place because there were few other colonists and staying together was the obvious thing to do for safety.

As populations grew, the oldest son(s) would inherit the land and the younger children would migrate to other areas. From the north to the south and west. In what is now Canada settlers followed the St. Lawrence River inland. As each of the major canals were constructed easier travel afforded more opportunity to the west. In the US the old Indian trails heading south and west were followed and land opened up. Covered Wagons and then the Rail systems, criss-crossing the continent opened even wider expanses of land for migrants to settle.

In my own Gaulden (Gaulding, Goulding, Gauldin) family we started in VA (one theory is that my Gaulden’s started in England traveled to Bermuda, went through Eleuthra, Bahama, to Massachusetts then to Virginia). From Virginia we traveled through NC for a bit, then on to Sumter, South Carolina. The John Gaulden Family of Sumter, SC, had it’s younger Children migrate to York County, SC, to Georgia, and even to Western MS/Eastern LA.

My Templeton family arrived from Ireland, landed in Charleston and settled in Laurens County, SC. From South Carolina, portions of the family migrated to Indiana. When more land opened up to the west they moved on westward. The Templeton DNA Study and One Name Study has worked to identify far flung family groups by migration patterns. We can infer which of the 8 Templeton gateway Ancestors someone is from and identify new people to add to the Templeton Gene Pool with DNA testing. 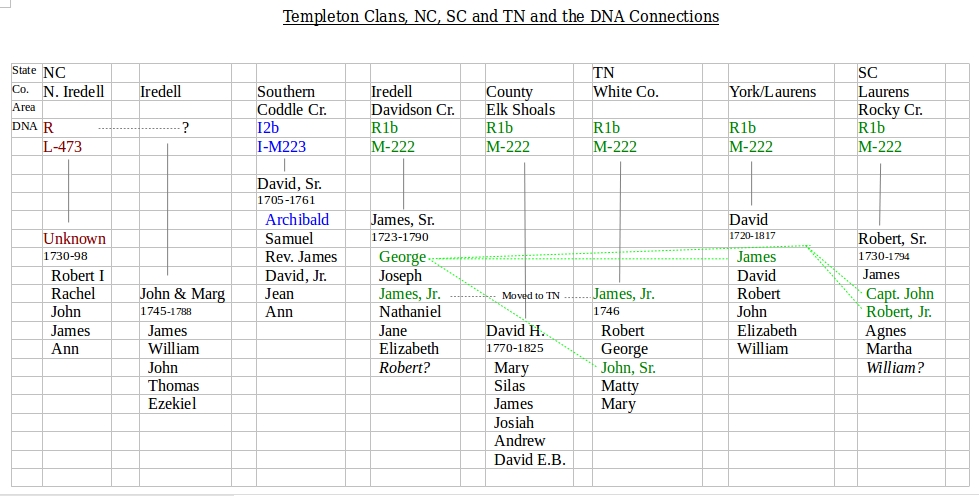 The Hunt line started out in Bedford County, Virginia. Thomas Hunt had 14 children who migrated to all parts of the continent. My particular Hunt, Esli, Sr., moved with a couple of brothers to Western North Carolina (the State Of Franklin now Tennessee).  Then, after traveling around SC during the revolution took his land grant on what was to be the line between Greenville and Pickens Counties, SC. From there Esli Sr.’s family spread out over Cherokee lands and westward.

The Dillard’s migrated with other family groups from Virgina to Western NC, then on to Rabun County, Georgia. The Lords started in Connecticut and ended up in Jackson County, Georgia. The McElmoyle’s are a bit harder to trace to one individual, but different groups of McElmoyle’s landed in Charleston, Philadelphia, Baltimore, New York (straight to Ontario for some) and Boston and spread from those locations to points south and west.

Knowing that Upstate South Carolina was a resort destination for those to escape the coastal heat and malaria for cool summers in the mountains, helps to understand why some Charleston families have deep ties to Greenville, SC. There is even a Charletson McElmoyle family who are split between a cemetery in Clemson, SC and a cemetery in Charleston (with tombstones in both) because of the civil war.

So ask your local historical society where the people came from and why they settled your area of the world. You may find a veritable road-map to your ancestors origins.